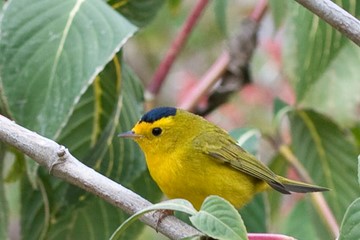 News broke on Tuesday that Tony Marr and Roy Dennis had found a Wilson's Warbler in a garden at Ness on Lewis. This is a tiny warbler, only slightly larger than a Goldcrest, which breeds in Arctic Canada and Alaska, and winters in South America. Bright yellow and the male has a black crown, this is a stunning looking bird. I had been fortunate to see one in Guatamala when we visited in 2008, but this was a first for Scotland and only the third record for Britain and Ireland. A real mega, the temptation was too great and I popped over on the ferry to join birders from the length and breadth of the country, some who had arrived by plane, and others who had driven overnight from as far away as Southampton. The bird proved extremely elusive, favouring dense ground cover and certainly not popping up to pose for photographs - the image shown was taken in Guatamala! - there are now two images in the Scottish Gallery by Andy Williams. However, it proved obliging for all of us and there will no doubt be a mini invasion of Ness this week-end. There was also a Yellow-browed Warbler in the same area. Many thanks to Tony for exercising firm but diplomatic crowd control and to an understanding neighbour whose garden was invaded. Details will hit the birding press but meanwhile it has stolen the headlines in Fios - the north Lewis newspaper.