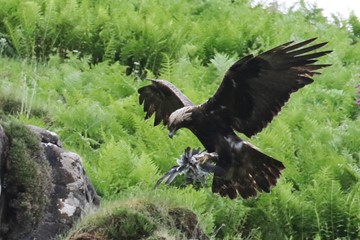 We checked 30 well established ranges on Skye and Lochalsh and found 29 of these to be occupied by an adult pair. For a short period in spring a young male and female were seen nest building at a new site on the border of an occupied range, but not after that. Of the 29 pairs, 24 were seen incubating, 5 pairs were not nesting, and only one of these pairs prepared a nest. Three of the pairs not nesting are known to be made up of old birds, two of which have not laid since 2011. Twelve pairs failed at the egg stage and deserted aggs were collected under licence from 3 of the failed nests and sent to the Predatory Bird Monitoring Scheme at the CEH for analysis. The other 12 pairs all hatched chicks. Two pairs lost their single chicks at the downy stage, both on vulnerable and easy accessible nests. On one of these we found a chewed off downy chick's wing and suspected fox predation. We suspect the other downy chick may also have fallen prey to a fox as it was also a 'walk-in' site. A 3rd pair lost a chick at approx 7 weeks, and this site had strong evidence of fox predation. Chewed feathers were found on the nest with no other remains. Fox scats were below the nest and we found a mass of feathers mainly from the chick's left wing on a mound downhill from the site, all with chewed ends, as if the fox had carried off the chick and stopped to remove some of the 'weight'. It was thought that the poor weather would have made the nests more vulnerable as both adults would have been busy hunting leaving the nests unattended for longer than usual periods.

The remaining 9 pairs successfully reared their chicks, including 3 sets of twins, making 12 fledged young in total. All 3 nests with twins were situated on sea cliffs where there were good supplies of rabbits and seabirds. One of these pairs had a female breeding for the first time and she did especially well to rear twins facing the full force of the strong winds and rain throughout the spring and summer.