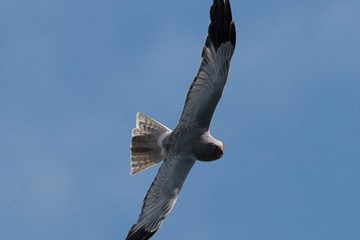 Because of widespread persecution of Hen Harriers on grouse moors there has been a growing campaign amongst raptor enthusiasts and activists, to raise public awareness of the problems, and this has culminated in a national Hen Harrier Day on Sunday 9th August, 2015. There are several events in Scotland, and one of these is at Loch Turret in Perthshire, details of which can be found at http://www.the-soc.org.uk/hen-harrier-day-9-august-2015/. There is also a dedicated website www.henharrierday.org with details of other events throughout the country. Regular visitors to this website will be aware that we have few persecution incidents on Skye, probably related to the fact that we no longer have grouse moors or sporting estates. My own research on Skye has shown that fox predation is a major problem. However, both adult and juvenile birds disperse in the autumn and there is little doubt that many will be vulnerable to persecution when they move south into hostile country. Numbers of breeding birds on Skye have declined by 50% in the last few years and it is strongly suspected that persecution is impacting significantly on numbers not just here, but throughout Scotland. There are strong views that the authorities are not doing enough, and this has resulted in petitions to ban driven grouse shooting and other inititiatives through social media. The hen harrier is a spectacular species and I am extremely privileged to have spent the last 16 years studying some aspects of the species behaviour. Its decline is a genuine cause for concern, and appears to be inextricably linked to its systematic elimination on grouse moors. This is not a new problem, and one I first experience on the moors of Perthshire back in the 1960s. Despite full legal protection however, persecution has probably increased during the last 10 years and that is a real worry. The unexplained disappearance of five males from breeding sites in the north of England a few months ago, illustrate the challenges facing the species. For more information see www.birdersagainst.org.