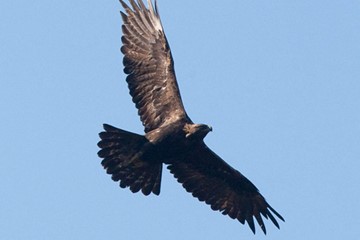 This post is prompted by a BBC and RSPB report claiming that Britain's oldest Golden Eagle, at 18 years of age, was found dead at Forsinard www.bbc.co.uk/news/uk-scotland-highlands-islands-34084179. Far from being old, this bird is actually in its prime. Jeff Watson's monograph shows the oldest birds from ringing recoveries were a 25 year old bird in France in 1977, and a 32 year old bird in Sweden in 1970. Seton Gordon was aware of a 46 year old bird in captivity. The Skye population has been studied intensely for over 30 years by Ken Crane and Kate Nellist. Using plumage differences Ken and Kate are able to identify individual birds, follow these birds over successive breeding seasons, and have been able to establish that at number of birds were over 25 years of age and in some cases over 30 years, bearing in mind an adult will only start breeding when it is 4/5 years old. Productivity tails off amongst these older birds and they can tell when there is a change in the structure of a pair, and an old bird has died. Another Golden Eagle friend, Mike Gregory, ringed a young bird in a nest of triplets at Inveraray, Argyll, in 1973. It was recovered long dead by a shepherd on an estate in West Perthshire in June 2012. This was probably a site I had visited back in the mid 1970s with another eagle stalwart Pat Sandeman. Even taking into account that the bird had lain undiscovered for a year during its decomposition, it is reasonable to assume it was at least 38 years old. The recovery was reported to the BTO and the information only filtered back to Mike recently. Why BTO and those in the raptor community did not make a REALnews story out of the recovery is anyone's guess. Perhaps it was because there were sensitivities about the location on the part of the landowner. Sadly there are too many negative stories about mortality in predators but this is a good news story, of a bird which lived to an age where it is could rightfully claim to be one of the oldest surviving Golden Eagles in the wild, not a mere 18 years of age!! And hats off to the landownwer who provided it with a safe haven for the duration of its breeding life.