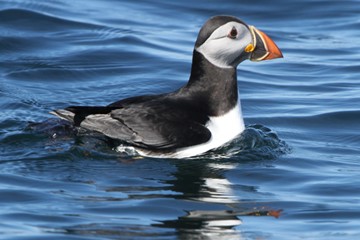 Every summer a small group of us visit some of our remoter islands to try and carry out natural history recording and this year we managed a trip to Trodday and Flodigarry Islands led by Stephen Bungard. Similar to Isay, Trodday is a wintering site for Barnacle Geese. A total of 27 bird species were recorded and most were fairly predictable. Of particular interest was a small group of Puffins which we could not prove were breeding, but certainly appeared to be nest prospecting so perhaps a potential breeding colony for the future. On the trip to Flodigarry Island we hugged the spectacular basalt cliffs south of Balmacqueen. These held two colonies of Kittiwakes, good numbers of breeding Fulmars and several pairs of Guillemots and Razorbills. Flodigarry Island was almost completely burnt several springs ago and the vegetation is still recovering. Less diverse than Trodday we recorded 20 species including Wren and Reed Bunting. About 25 pairs of Arctic Terns were breeding on Sgeir na Eireann. Nick Hodgetts found a rare liverwort which made his day. Good numbers of Twite on both islands suggested that some young had managed to fledge despite the weather. There was a nice pod of Common Dolphins just offshore. Another superb day island hopping, always great exploring new areas and coastlines which are otherwise inaccessible.