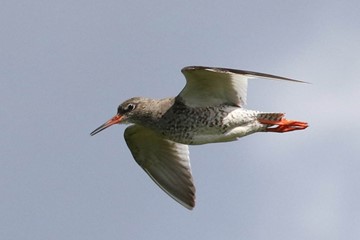 Isay is the largest in a group of three islands in outer Loch Bay, Waternish, the others being Mingay and Clett. It is the site of a planned fishing village dating from 1830 so has much historical interest. Highland Council Ranger Service organised an afternoon trip to Isay and we were blessed by fine weather. From a birding standpoint the island is best known for its wintering flock of Barnacles so this was an opportunity to look at its breeding birds. The biggest surprise was to find at least one calling Corncrake. There were two gull colonies holding over 100 pairs of Herring Gulls and 50 pairs of Lesser Black-backs. The small plantation held several pairs of Lesser Redpolls and the adjoining reedbed, a few singing Sedge Warblers. There were several pairs of Lapwings and a pair of breeding Redshanks was a real bonus, an extremely scarce breeding bird on Skye. Large numbers of summering Greylags have been counted in the area before and the totals probably exceeded 250 with many moulting adults as well as groups of goslings. A total of 30 species were recorded and thanks to Ellie and John for organising the trip.