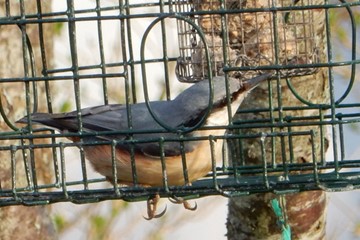 In the spring of 1885 two Nuthatch were reported "haunting the trees" at Waternish House by Captain MacDonald, a record which was accepted at the time and included in the historical accounts. However, it is one of these records which has always been regarded with a degree of scepticism, and it has taken 130 years for a genuine record to turn up. Lorna Flavelle found a bird on her feeders in Broadford on 19th April and luckily had a camera on hand to record the event. It visited fatballs three times that day but there have been no other reports anywhere in the area since, so check your feeders carefully!! In 2010 a bird was recorded by Brian Neath at Carr Brae, Lochalsh, and at the same time a bird had turned up at Morar. It is a species which is slowly expanding its range, and especially in winter, is very much dependent on garden feeders. This is as far up the west coast as the bird has been recorded. The record still has to go before the Highland Record Committee but the availability of images makes that a formality.