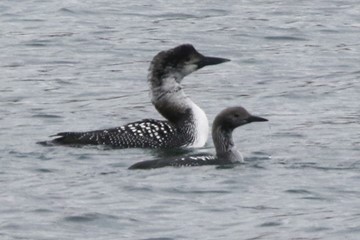 Great Northern Divers winter in Skye and undertake a complete body moult at this time to assume their stunning breeding plumage. Black-throats are scarce breeders on Skye and their courtship display of synchronised swimming and aquaplaning is spectacular but rarely seen. Watching a single Great Northern on Loch Slapin yesterday, I became aware of another diver coming into the middle of Kilmarie Bay which I realised was a Black-throated Diver. There was then several minutes of interaction between the two, which initially appeared aggressive mainly on the part of the Black-throat. I then realised it was a courtship display with a lot of chasing, diving, head dipping, birds rearing out of the water and moving across the surface. Whilst I managed to take a series of images, these were all fairly distant but the image shown shows the significant contrast in size. It was the Great Northern which eventually took sanctuary at the side of the loch and throughout the episode the Black-throat had certainly appeared to be the the main pursuer. There have been records of hybridisation between the two species, one in Scotland at Loch Maree many years ago. It was a fascinating encounter.