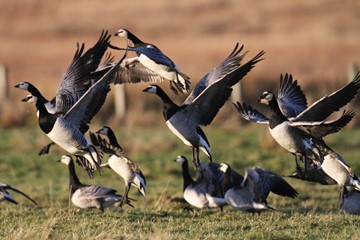 Its been a tough winter on Skye with wind and rain and I managed to find a brief break yesterday for a trip round the north end to have a look at the Geese. Its very much a case of mixed fortunes with our wintering Barnacles remaining stable but the Greenland White-fronts seemingly in slow decline. Our wintering Barnacles are from east Greenland and there are several groups, usually associated with offshore islands. However they can be increasingly seen on the main island especially around Staffin and also in the Balmacqueen/Kilmaluag area of Trotternish. The population certainly seems to be reasonably stable with counts very similar to those in the 1960's showing combined totals of 400+. Unfortunately the Greenland White-fronts are a different matter. This is now a Scottish Biodiversity priority species but the small flocks on Skye are left to get on with it, and do not seem to be fairing well. The Trotternish flock is only 15 this winter, a far cry from the peak of 75 reached in in 1978. Even worse, the Broadford flock, regularly around 50 some 15 years ago, is struggling to reach double figures. Whilst the problems facing this species is mainly on the breeding grounds, it is difficult to know just how long it will be before these two small flocks disappear. There was certainly no shortage of Greylags yesterday, always worth checking through and a Pink-footed Goose was an unusual winter record. Four goose species on a cold March afternoon is a good mix, but I wonder for how long.