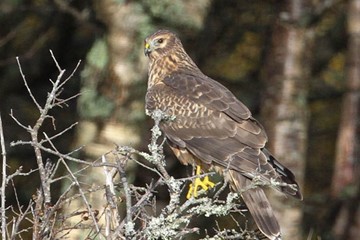 With a total of only 127 species recorded, a full ten species less than last year, 2014 was the poorest year for bird recording on Eigg for some time. This low species total was almost entirely due to the lack of migrant species appearing in both the spring & autumn periods plus the absence of any prolonged cold spells during the winter months. In direct contrast to the low species list the number of proven breeders, 77 species, was exceptionally high, two species up on last year & the best total for many years. In general it was a very successful breeding season throughout the island with Eiders, waders & many passerines raising large numbers of young. Two pairs of Red Throated Divers successfully reared young whilst the high vole population produced a good season for Hen Harriers, Kestrels & owls. Arctic Terns had their best breeding season for many years & raised good numbers of young while Curlews bred for the second year running & Collared Doves bred successfully for the fourth time on the island. The House Sparrow population explosion continued unabated with numbers continuing to increase dramatically. There was also an unusual record of a Tree Sparrow which hybridized & hatched young with its House Sparrow mate. On the downside, the continuing disastrously low Rabbit population impacted badly on the large raptors that rely on them for food. Both Buzzards & Ravens suffered to a considerable degree & sadly Golden Eagles failed to raise young for the first time in 18 years. Other species that suffered a poor breeding season included Fulmars, Shags & several species of finch.

More noteable spring records included a Canada Goose (rare on Eigg), the islands 4th Velvet Scoter, a Corncrake in late May, a few Whimbrel, a Ring Ouzel in mid April, a Rook (scarce on Eigg) & a series of Yellowhammer sightings. Autumn was possibly even less productive than spring with even passage Fieldfares & Redwings very thin on the ground. Odd records included very regular sightings of a pair of imm White Tailed Eagles, a few Greenshanks, a Sandwich Tern, three records of Bramblings & a flock of 20 Common Crossbills in October. The winter periods were typically pretty quiet with the usual invasion of Woodcock, a few Jack Snipe, an Iceland Gull in January & several Glaucous Gulls the only records of any note.

(An extract from John’s summary)