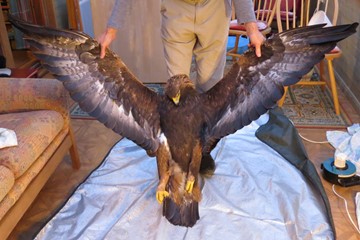 There is a national census of breeding Golden Eagles in 2015, but we are fortunate that on Skye the population is monitored annually by Ken Crane and Kate Nellist. This means checking 28-30 home ranges, a study which has lasted over 30 years, making knowledge of the Skye population as good as anywhere in the country. In 2014 only 12 young fledged reflecting continued low productivity during the last few years, with 12.4 being the average number of young fledged per annum between 2005-2014. Only 8 young fledged in 2012. By comparison, average productivity between 1995-2004 was 17.4 young per annum, so there is clearly a problem. An explanation might be in a succession of bad winters with extreme gales and heavy rain, which means that birds are in poor condition as spring approaches and therefore a number of pairs fail to breed. The decline in sheep numbers as a result of agricultural subsidy changes means less carrion on the hill, important to sustain Golden Eagles during the winter months. The growth in the White-tailed Eagle population also means there is increased competition for any carrion. Whilst the scientists will claim that there is little competition between the two species of Eagles for food and nest sites, some of our most experienced fieldworkers disagree, and White-tailed Eagle productivity on Skye, with only half the number of territories, now outstrips Golden Eagle productivity. Poor productivity is now a feature of a number of West Highland study areas so problems are not just confined to Skye. Two adult Golden Eagles were also found dead on Skye in autumn 2014. The first of these was a badly decomposed bird found at Gearymore at the end of September. Unfortunately the results of the post mortem and toxicology analysis were unable to determine a cause of death. This bird had been ringed as a chick on Canna in 2004 so was only 10 years old. Only six weeks later another adult bird was found dead at Heaste (see image) and the PM found evidence of haemorrhage subdurally and within both eyeballs. There was no evidence of trauma externally. Although the exact cause of death will never be known it is suspected that the bird was involved in a collision either in pursuit of prey or as a result of being chased by another territorial bird. The losses of mature birds from the population invariably means that their replacements will be sub-adults, not likely to breed successfully for several years. The problem of poor productivity may therefore be exascerbated. The Golden Eagle survey of 2015 may therefore be timely, and help focus attention on the problems facing our national bird in areas which were formerly exporters of surplus birds, but where annual productivity is now at such a long term low that the sustainability of the present population may be at risk.