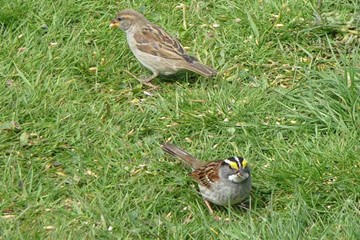 On a local scale I suppose I now regard myself as a bit of a twitcher so as well as following up new birds in Skye and Lochalsh, I have been known to take trips to the Small Isles and to the Western Isles, in search of new species. According to my first Field Guide, in 1959 I had recorded 132 different species in Scotland by which time I was 12 years old and had reached 200 species by 1976. I honestly cannot tell you what my Scottish List stands at now because I'm of an age where I start to forget things. I have friends who have World Lists, Western Palearctic Lists, UK Lists, Scottish Lists, and Highland Lists. Twitching and Listing go together and it is all a bit excessive and obsessive. Wishing to avoid too much competition, I only have a Skye List which now stands at 192 species, or if I include Lochalsh, it would be193 with the Nuthatch at Dornie. Others might have local lists but they haven't admitted to it. My ambition is to reach 200 species before any medical condition intervenes. The Skye List now stands at 254 species, a considerable improvement on the 238 species recorded when Skye Birds was first published in 2005. My obsession, with considerable help from Martin Benson, and assistance from many others who follow the website, has been a factor in us adding several new species each year, the latest of which are American Golden Plover and Mediterranean Gull. There are some obvious gaps which I will endeavour to fill. There are also species whose local range is expanding.....such as Jay. Regular autumn migrants such as Yellow-browed Warbler has yet to be recorded in the area. Some of these rarities drop in for literally hours, whilst others will hang about for a few days. If you think there's a rarity near you, try and get a picture, and let us know as soon as possible. In the case of the Harrapool White-throated Sparrow in the image, Richard Charlesworth did all of these things, but I still 'dipped' (a twitching term for failure!) - and for long sleepless nights.