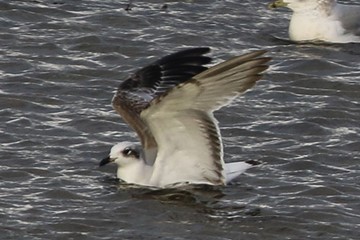 A major highlight in the 2014 birding season has been an unprecedented influx of small gulls to the east coast sea lochs of Skye. This has included well over a thousand Black-headed Gulls and several thousand Common Gulls. Whilst the origins of these birds has not been established they have no doubt been attracted by rich feeding in the form of sprats, fry and fish eggs. There has also been an influx of first winter Mediterranean Gulls, a species previous unrecorded in the area. However, as its range has been expanding it may have been overlooked, but remains a scarce bird in the Highland recording area. Martin Benson found the first bird on September 15 in Broadford Bay and the majority of sightings were subsequently in the Bay which is better watched than anywhere else on the island. Though Meds are distinctive, they can be difficult to locate in constantly moving flocks. Two other singles were reported in October then on November 1st, there was a single at Waterloo, one at Loch Ainort, and Sean Morris found a bird on Rum. A systematic search on November 2nd found six different birds, with three at Loch Sligachan. On November 12th there were three, with two at Loch Portree and a single at Loch Sligachan. Whilst the overall numbers of small gulls has declined there was still around 800 Common Gulls in Broadford Bay on December 19, and this included two Med Gulls. One of the Common Gulls has a colour ring which shows it was ringed as a chick in 2013 on the Shiants so some of the birds are at least local. However, there is still a big question of the origins of the Meds which have helped brighten up some dreich winter days.