Another Break in Barcelona 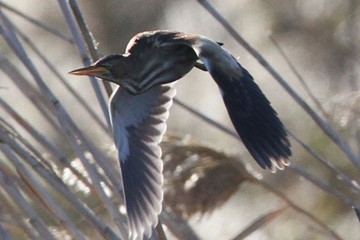 With family in Barcelona, we are regular visitors to Catalonia which has some exciting birding hotspots. Perhaps not so exciting, because of the noise from aircraft landings and take-offs, Llogrebrat delta reserves with a couple of nice hides, is a regular haunt for me and invariably turns up something interesting. Little Bitterns breed in the area but are very rare in winter, so I was very lucky to see one and get a couple of quick images. It was a bit late for migrants though I did manage to spot two late Swallows. Goshawk and Peregrine are regular in the reserve, and the pick of the wildfowl were some very smart looking Red-crested Pochard. Several days were spent in the Ebre delta where the water levels were higher than we had ever seen them. Many rice fields were being ploughed attracting hundreds of Egrets including many Great Whites. With lots of water about waders were widely dispersed, but included wintering Greenshank, Spotted Redshank, Ruff, Common and Green Sandpipers. A roost site near the River Ebre must have contained several thousand Glossy Ibis. Again with high water levels, Kingfishers could only be described as abundant. I was also able to enjoy a flypast by a Great Bittern. My birding had not been as intensive as in previous visits but I was still able to get over 100 species. There are a number of images in the Overseas Gallery. With temperatures hitting 17-20 daily, and rain only on our last two days, it was a very pleasant way to spend late November.