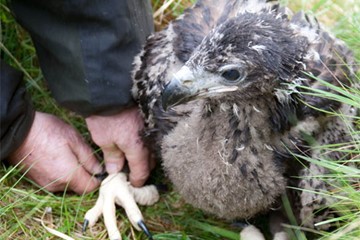 The year 2014 marked another significant milestone for the Scottish WTE population, it being considered now large enough, that funding into the project as a whole was considerably reduced. This has resulted in the reduction of paid contract workers, and so now, information on territories is being gathered by an increasing band of volunteers. Despite this growing army of locals, however, information has been hard to get for some. In 2014 Skye and Lochalsh was thought to have approximately 22 territories, an increase of five over last year’s figure. Many of the five ‘new’ ones were probably in existence last year but did not breed, and were therefore difficult to pin down - or if they did breed they escaped notice completely. RSPB did fund myself as a contract ringer in mid June with the intention of continuing to fit colour rings to as many nestlings as possible. So, in all, six broods were ringed, totalling nine young. However, the local RSPB officer is certain that possibly up to four other Skye territories fledged young from nests that were not located, or were known to exist but inadequately covered. Range expansion now means that WTEs are now at last breeding on the Sleat peninsula; one territory was successful with one other making an unsuccessful breeding attempt.

The change in funding and monitoring policy means that from 2014 WTE information is being collected and collated by the various Raptor Study Groups throughout Scotland, in the same way that these groups have been doing for years for the other Scottish Raptors. I am the current WTE coordinator for the Highland Group is and worked as a RSPB Skye contract worker between 1997 and 2005 and have been a contract ringer since then. More volunteers are needed, but interested parties should be aware that many of these territories are both very time consuming and quite challenging to get good information from. So anyone wishing to help should be sure of having a significant amount of free time to commit. For more information contact me at justin.grant@freeuk.com.