Hurricane Gonzalo blows in some Megas 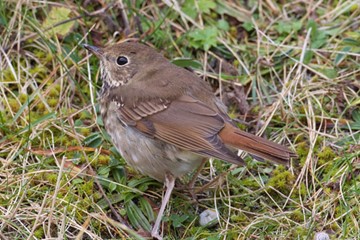 In the language of twitching, a mega is an extremely rare bird. Though we have had a number of rare birds on Skye we have rarely had a mega. Just across the Minch the western isles collects megas every year, and with several top notch birders both resident and visiting in the autumn, the chances are increased. We had booked a holiday cottage in North Uist just as Hurricane Gonzalo was winging its way across the Atlantic. Extreme weather systems, especially during autumn migration, have a habit of bringing american rarities to our shores. Martin and Carol Benson joined us for a few days and with a little good fortune, another birder discovered a Hermit Thrush less than a mile from where we were staying. This small American thrush was only a 5th record for Scotland. It would normally be foraging on the woodland floor somewhere in Central America rather than in a sandy depression amidst the Balranald dune system. It showed extremely well as Martin's superb image shows and hit the national news. At the same time two other visitors from America turned up - a Grey-Cheeked Thrush on Barra and a Chimney Swift at Ness on Lewis. The swift is only the third record for Scotland. Martin and Carol just so happened to be heading to Lewis and caught up with the bird before they headed for the ferry home. A 2nd mega in two days for Martin but unfortunately he had left spare batteries for his camera in the back of my car, so missed the opportunity to get some pictures. During our week on the Uists, we endured some pretty horrendous weather but still managed to record over 70 species and of course the Hermit Thrush for me, was the big bonus. There is every chance that a mega will be lurking somewhere in Skye and Lochalsh.....always worthwhile checking everything out carefully. The likelihood is it may not be a small Song Thrush....but something entirely different.