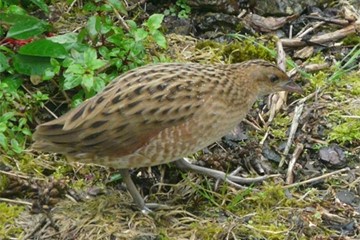 First I’d like to thank all Skye Birds contributors and those who gave me weekly reports of their local corncrakes. This information helps to protect corncrakes and promote their breeding success.Many of you will have heard that the overall count for corncrakes in Scotland has reached its highest figure since recording began in the 1990s - over 1280 calling males. On Skye, during the survey we counted 38 calling males which is on a par with last year.The season began about 10 days earlier than usual with the first males starting their repetitive callingon 22 April . Although the winter was very wet, it was unusually mild. This meant that grass growth was good in spring and there was plenty of tall vegetation available for corncrakes to hide in when returning from their migration in Africa.Most of the birds were on the west coast of Trotternish with Lionacro being a particular hot spot. There were a few birds around Uig in May but most had stopped calling by June. Waternish attracted at least14 males with a good concentration around Trumpan. They could be heard throughout the season from early May until the end of July.Again the mowing contractors were very supportive of corncrake friendly mowing (starting from the inside of the crop out and moving outwards) in areas where birds were known to be calling. This important technique can mean the difference between life and death to corncrakes nesting in the silage meadows.

Please feel free to contact me if you would like any more information. My thanks again to all contributors and for the support of www.skye-birds.com – I look forward to hearing from you again next year!