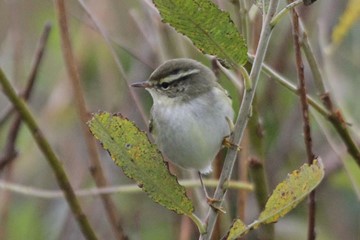 North-west Sutherland is one of the most remote areas in Highland area and like most of the west highlands is rarely visited by birders. Peter Stronach has been visiting the area regularly this year on the basis, that its geographical position, and lack of woodland cover, would make it attractive to migrants. This extends the known pattern of drift migrants from Scandinavia, that in certain wind conditions, make landfall in Shetland, Orkney and the Western Isles. With favourable easterly wind conditions this has proved to be the case and a small group of us joined Peter for a week-end of birding. There has been a huge fall of Yellow-browed Warblers in the Northern and Western Isles during the last week and North-West Sutherland has had its share with around 6 being recorded over the week-end. In addition there were large numbers of Blackcaps, Goldcrests and Brambling. Other highlights included a Reed Warbler at Kinlochbervie, and a Hawfinch and Yellow Wagtail at Balnakeil. There is a lack of woodland cover in the area so most of the species were found in a few sheltered gardens and patches of woodland cover. A species like Yellow-Browed Warblers move south they encounter bigger areas of suitable woodland habitat and can be much more difficult to locate. This explains why there is no record of this species for Skye but without doubt they will pass through - keep your eyes pealed for this delightful little warbler which is not much bigger than a Goldcrest.