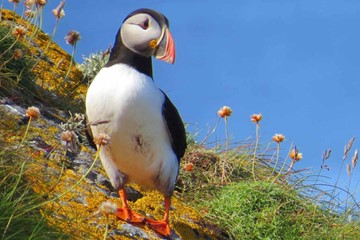 In an effort to visit most of our offshore islands, Stephen Bungard the Botanical Recorder for the area organised a trip to the remote group of islands north-west of Uig comprising Fladda-chuain, Gaeilavore Island, Thon Eilean, Gearran Island, Am Bord and An t-Iasgair. Only the first is readily accessible and some of our group also managed to land on Gaeilavore. Access was by rib provided by skyeXplorer out of Uig. Most of the recording was done from the boat but because of what turned out to be a fantastic day with little wind, we were able to spend over three hours on the largest island in the group, Fladda-chuain. These are the best seabird colonies in the Skye and Lochalsh area and are visited most years by the Shiants Ringing Group. Information provided by seabird surveys in the past provides a record of fluctuating numbers especially amongst species such as Arctic Tern and Puffin. It was estimated there were at least 500 pairs of Arctic Terns which were confined to Fladda-chuain. There must have been 500+ pairs of Puffins which appeared to be nesting on all the other islands including An t-Iasgair. Guillemots, Razorbills and Puffins with sand eels indicated that young were perhaps being fed but there was little evidence of any young birds on the sea. Many Kittiwake were also nesting but again there was not much evidence of chicks. Conversely, Shags were doing well with many broods of three and 20+ pairs of Cormorant, a restricted breeder in these parts, had produced many young on Thon Eilean. It was encouraging to see a young Peregrine on the wing. At least 6 pairs of Great Skua were present and 3 of them were breeding and had produced chicks. In all some 25 bird species were recorded in what was a wonderful trip in glorious sunshine to a spectacular and rarely visited corner of Skye. Puffin image by James Merryweather and there are other images in the Gallery.