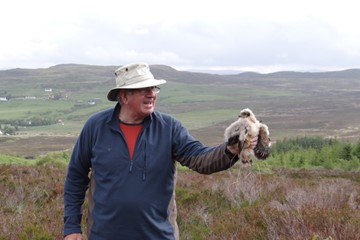 An analysis of my Hen Harrier study on Skye between 2000-12 has just been published in Scottish Birds Volume 34 (2). The abstract of this paper is as follows:-

"Hen Harrier nesting success was studied on Skye from 2000 to 2012, during which period there were 88 breeding attempts, 47 of which resulted in nest failures, with predation the most likely cause. To obtain more accurate information on predation at Hen Harrier nests, four cameras were used at nests between 2009 and 2012. Evidence from these cameras and post-mortem examinations showed that predation by Red Foxes was the commonest cause of nest failure, 65% of failures being attributed to foxes. In 75% of cases predation took place after dark. Foxes killed two incubating adult females on the nest. Foxes mainly predated young from two to four weeks old, but as recently fledged young return to the nest site to roost, they are also at risk. As fledglings increased in size, nest sites became more detectable by foxes. In the absence of nest camera evidence, it was often impossible to attribute a cause of failure, as no conclusive evidence was left at the nest site. In one instance, foxes visited nest sites over a period of up to 10 days until all the young were removed. At another site an adult fox brought cubs to a nest when small young were removed. There was little evidence that adult Hen Harriers can successfully defend their young against an incursion by a fox either in daylight or darkness."

If anyone would wish to see a copy of the article please contact me and I will send a pdf. Many thanks to everyone who has sent in records which make this study possible. It is too early to give details of the 2014 study but there has been an improvement on 2013 with at least 5 breeding pairs in the study area, all of which have hatched. Birds started breeding early and it appears to be a good vole year. The image shown was taken at a nest over a week ago by Mathew Kirk.