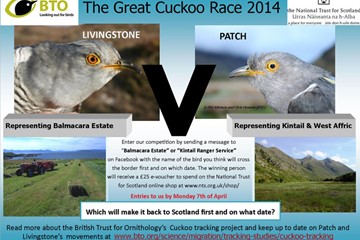 It may be another 4 months until the Commonwealth comes to Glasgow for the 2014 Games but one epic race is already under way. In Spring each year millions of birds complete marathon migrations from their wintering grounds in Africa back to Scotland in order to breed. Over the last few years the British Trust for Ornithology have been conducting ground-breaking research into the annual movements of one our most fascinating migrants – the Cuckoo. This has included tracking individuals using small solar powered satellite tags. In 2013 individual male Cuckoos were caught and fitted with tags at the two neighbouring National Trust for Scotland properties of Balmacara Estate and Kintail & West Affric in Ross-shire. National Trust for Scotland staff at the two properties have been keenly watching the movements of “their” birds on the BTO’s website since. In late February Balmacara’s “Livingstone” and Kintail’s “Patch” were both near the equator in Commonwealth country Cameroon and starting to move north back towards Scotland. The friendly rivalry between the two Trust properties has been roused and staff at each are now backing their bird to be the first one back to Scotland. They are inviting members of the public to predict which of the two birds will make it across the border first, and on which precise date. The winning entrant will receive a £25 e-voucher to spend at the National Trust for Scotland online shop.
Balmacara Estate Property Manager Iain Turnbull said: “We’ve obviously got an affinity for Livingstone from our property and will be rooting him on, but in all seriousness we’re just hoping that both Cuckoos survive the exhausting journey back to their breeding grounds in Scotland okay. This work by the BTO is proving absolutely fascinating and it’s incredible to think birds currently in Cameroon will soon be calling from the moors above our office!” You can follow the “Great Cuckoo Race” and find out about the competition on the Balmacara Estate and Kintail Ranger Service Facebook pages and watch the movements of the birds directly on the BTO website http://www.bto.org/science/migration/tracking-studies/cuckoo-tracking