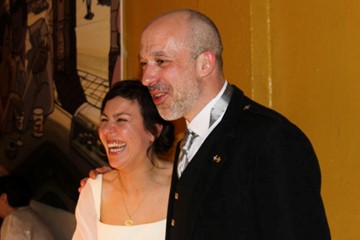 If you follow this blog you will have noted we visit Spain, or I should say Catalonia, at least twice a year since our eldest son moved to Barcelona in pursuit of a local girl. They were married on March 14, a fusion of Scottish and Catalan culture, and rather than have a birdy picture I thought you might enjoy an image of Neil and Irene on what was a very happy wedding day. The weather was wonderful throughout with temperatures up into the 20's every day and our first week was very much wedding related with not too many birds to report.

On the 2nd week we headed north into the midi Pyrenees, in particular the Sierra Guara in the Huesca area. I also celebrated a birthday and my reward for a pre-dawn start was a Wallcreeper at Alquezar, a first for me after several years trying. It was possibly the same bird seen by John 'the bird' from Eigg who visited the same area several weeks earlier. There is a rather poor image in the Gallery. Another highlight was a visit to a vulture feeding station. This coincided with a visit by a Spanish film crew doing a piece on the greek tragedy of Antigone - and some 500 Griffin Vultures coming down for food. There were also a few Egyptian Vultures and probably two distant Lammergeirs, as well as a Golden Eagle spicing things up. Many migrants were on the move and a second lifer was a Black-eared Wheatear which breeds in Spain, and we were lucky to see a spectacular newly arrived male. A Bearded Tit at Lake Sarinena was a first for me in Spain and we enjoyed good views of a Penduline Tit. The last two days brought our first rain of the fortnight, coinciding with a visit to the Ebre Delta. Many of the wintering waders had already moved on though large numbers of Swallows were arriving. Whiskered Terns were already in breeding plumage and Audoin's and Slender-billed Gulls were displaying. We recorded over 120 species in our 2nd week, very much reflecting the fantastic birding opportunities available in this special part of Spain. There are a range of photographs in the Overseas section of the Gallery.