Where have all the Whitefronts Gone? 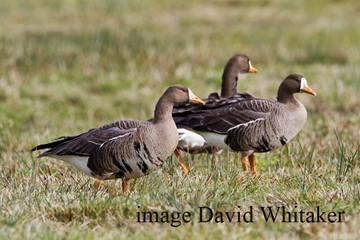 For the first time this winter I managed to get a count of the small flock of Greenland White-fronts which winter in the Broadford area. Not an easy task, the birds were scoped on Pabay from the new Broadford Pier, and I estimated there were 14 birds. This is roughly similar to the numbers we had last winter, but a far cry from the peak count of 82 in December 2000. Another flock in the north of Skye was previously in the Skeabost area and peaked at 75 in 1978 but numbers again declined thereafter. For the last 10 years this small flock has been in the Kilmuir area and numbers have reduced to around 20. Numbers have therefore rapidly declined at both sites and as this species is a scottish 'priority' bird of conservation concern, the declines should be a source of some concern to both statutory and non-statutory organisations. It is a bird which is vulnerable to disturbance and although previously spending much time on croftland in the Breakish area, it was occasionally shot at, and it is little wonder that the birds now rarely leave Pabay. Unfortunately, with such low numbers, there is now little resilience in the population and it may only be a matter of time before it disappears completely from the area. According to the latest WeBS report the species has shown a 41% decline in the last 10 years, so the problem is not unique to Skye.