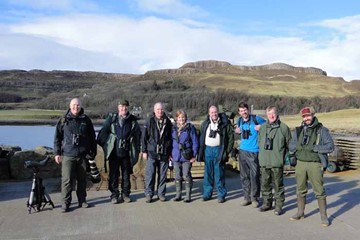 This american species breeds in the western states of Canada/USA and winters off the Pacific coasts of Central and South America. It has been recorded about a dozen times in Scotland, but never in winter. Interestingly, a bird was present on Canna in early July, 1981 but subsequently died. Probably a product of the unusual weather systems, coming across the Atlantic, the bird was first noted by local residents Geraldine and Winnie MacKinnon several weeks ago, and was photographed by Stewart Connor. The images were sent to Bob Swann. Although in Bulgaria at the time, Bob was able to identify the bird as a Franklin's Gull and the news broke. The Sunday Calmac service to Canna stays for about two hours on the island and an intrepid group of Highland birders managed to get over to the island on 16th February. In cold but glorious weather, the bird was seen at close range flying over the fields and seemingly hawking for insects. There are several images in the Gallery. The climax to a superb day out and thanks to everyone on the island for their help.