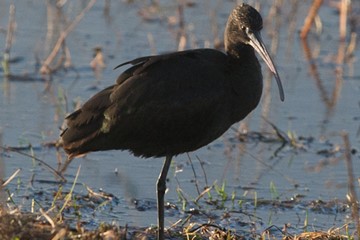 Many of us on the west coast could be forgiven for suffering from cabin fever over the last few weeks as we been blasted by winds and rain in one of the worse periods of storms many can remember. However the weather can be forgiven as it often brings some unusual birds and though nothing was recorded on Skye, some escape was necessary. The first bonus was an American Coot at Loch Flemington near Inverness on the 6th which coincided with a shopping trip and has proved extremely obliging for many visitors (see image in the UK birds part of the Gallery) . A trip to the Uists had been planned with Richard and Andy from the 8th to the 10th. The area rarely disappoints and all our time was spent on North Uist in excellent weather. Our searches for another american visitor, a Pied -billed Grebe proved disappointing but hopefully it will remain in the area to be seen another day. The major bonus however was finding a Marsh Sandpiper which has been around for several weeks when it should be wintering in Africa - a species which has only been recorded about a dozen times in Scotland (see www.western-isles-wildlife.com) for some excellent images. Another bonus however was Glossy Ibis. I had previously missed the birds which turned up in Eigg in late 2012, but this winter has proved exceptional in north Scotland with reports from Orkney, Caithness, Lewis and several sightings on the Uists. There may well be birds on Skye so look closely as our only record is a historical one. The bird shown was photographed near the RSPB reserve at Balranald. Other highlights included Glaucous and Iceland Gulls, but the sheer volume of wintering wildfowl and waders never fails to impress.