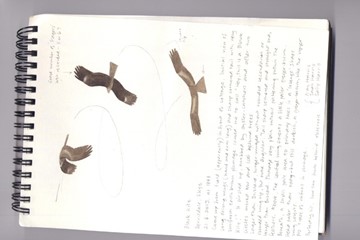 Records for a Marsh Warbler at Uig Bay between 17-28 June, 2013, and a Black Kite at Bernisdale on 21 June 2013, have been accepted by the Scottish Birds Rarities Committee (SBRC). The Marsh Warbler is a first for Skye, and was reported through Birdguides. It was followed up by RMcM and remained in the area until June 28. The bird was difficult to see and photograph, and the main identification criteria is a distinctive song full of mimicry, which included in this case songs of Swallow and Nightingale. The song was recorded using mobile phone and these recordings were important in having the record accepted.

The Black Kite record is a 2nd for Skye with the first recorded in 2010. It was seen by Sarah Harris and her father Alan from a holiday cottage the family were using at Bernisdale. The description submitted in respect of the record was of the highest standard including a sketch and field notes by Alan which are shown above. Records of this nature are always challenging but this illustrates the importance of using field notes and sketches in the absence of photographs. It obviously helps if you are a professional artist such as Alan - see the website http://www.alanharrisbirdartist.co.uk/