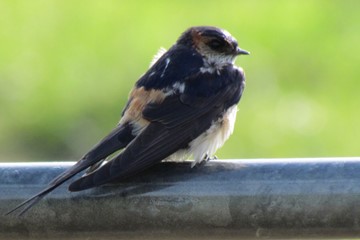 The Red-rumped Swallow originally found at Talisker Bay on Skye on 17th June 2011, and photographed subsequently by Ian Fulton on 29th June, has now been identified as belonging to the race daurica japonica which breeds in the eastern Palearctic and Oriental regions. It differs from the European form by streaking on the throat and underparts, a darker face pattern and an incomplete collar and the determination has been made by the British Birds Rarities Committee. This bird represents the first record of Asian Red-rumped Swallow in Britain and the same bird was present on Sanday, Orkney on June 9th 2011. The Skye bird was also photographed by Christine Hammond from Carbost whose image is shown here.