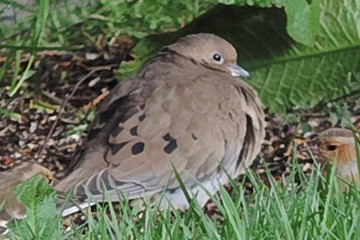 I'm not really a twitcher in the true sense, but if rare birds turn up nearby I'm keen to seek them out and add them to my local list. If it involves a nice ferry journey, especially taking advantage of my Highland Council 'bus pass, all the better. When the news broke on Monday afternoon of a Mourning Dove on Rum, and with Calmac heading that way the following day, a quick change in plans was justified. With the winter timetable, it was possible to go direct from Armadale where I was joined by Andy and Richard who had journeyed down from Ullapool. At Mallaig another 35 intrepid birders from all over the UK, twitchers in the true sense, many who had driven up from the south overnight, joined the trip. Rum was to experience a mini invasion, some giddy with excitement at adding a new bird to their life or year list, others giddy from what had been a bumpy sail in strengthening north-westerlies. The bird had been found below feeders in Sean Morris's garden and after a 15 minute march, we assembled in Sean's garden and waited. With only a couple of hours before the ferry returned, time was of the essence. Though the bird had been seen before our arrival, it had flown to a nearby conifer and was hidden in the depth of the foilage. Occasionally the wind blew the branches apart to reveal the tell-tale dove silhouette but otherwise, it had seen us, and wasn't moving. A strategic move to a nearby field enabled better views to satisfy everyone, and allow a few record shots to be taken. With soup, cake and drink provided in true island style, the contented visitors trecked back in time for the ferry. Apparently as soon as we left the bird came out of the tree and fed out on the grass - clearly it had encountered twitchers before! Thanks to Sean, Mike and everyone on Rum for looking after us so well and dealing so patiently with everyone. Thanks to Sean for the use of the image. There have only been three previous records of Mourning Dove in Britain, two of them in Scotland.