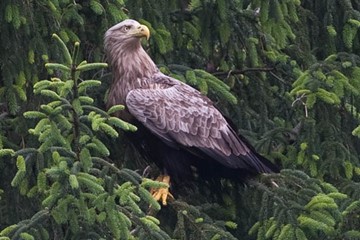 Skye and Lochalsh have 16 established White-tailed Eagle territories, two of which were confirmed as attempting to breed for the first time in 2013.

Thirteen pairs of White-tailed Eagles were confirmed as attempting to breed and despite the wet and windy weather during the incubation period, 10 of these were successful. In total, 14 chicks fledged.

Luckily, the moor burning in the spring did not cause any breeding attempts to fail but some burns were worryingly close to eyries. Human disturbance remains a threat to White-tailed Eagle breeding attempts with evidence recorded of birds being disturbed at nest sites during the season.