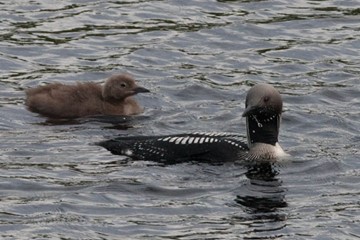 Although there have been occasional reports of Black-throated Divers breeding on Skye, none of these have been confirmed, and as far as we can establish the last report was in 1987, when an adult and two young were reported at a site. Summering birds were reported during recent Atlas fieldwork, and a pair with a single small young were discovered on a Skye loch in July. The young bird was fully feathered during a recent visit and we are confident that it has fledged successfully. As this is a species which is vulnerable to a number of threats including disturbance the breeding location is being kept confidential.