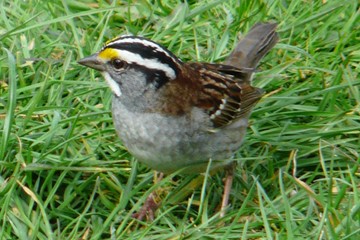 A White-throated Sparrow found by Richard Charlesworth in his garden in Harrapool on 20th May 2012, has been accepted by the BBRC. Recorded less than 20 times in Scotland, this rare North American vagrant was feeding in Richard's garden for only about 20 minutes, but he was able to take several images one of which is shown here, which were absolutely critical in identifying the bird, and ensuring that the record was accepted. It has proved once more that unusual birds occur on Skye and our island 'list' is steadily increasing through locals and visitors being on the alert. With the benefits of digital photography, the task can be made much easier. Though 250 is a local milestone, with several other records being scrutinised by committees, it will not last long! Congratulations to Richard for a super record.