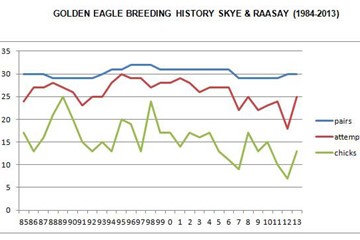 A mild but drier winter appears to have left Skye’s Golden Eagles in better breeding condition than last year, hence the increase in nesting attempts, which rose back to the 2008 level.

The total number of fledged chicks also rose in 2013, reversing the breeding decline of the last few years, which was encouraging.

However, the high number of breeding attempts which ended in failure remains a disappointment. In some of these cases, failure may be partly due to immaturity or ageing in one or other of the breeding pair. However, a high number of golden eagle pairs suffer increasing levels of disturbance from wildlife tourism, walkers, birdwatchers, geologists and photographers. This year disturbance also included moor burning, which may have contributed to desertion in a few cases.

The growing population of White tailed eagles continues to add pressure on the resident Golden Eagles.