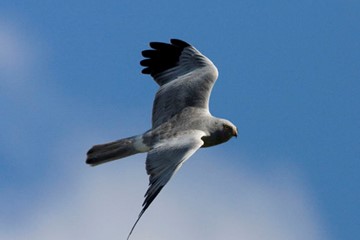 Last year's breeding season found a significant decline in breeding numbers from the normal 8-10 pairs to around 5 known pairs. The 2013 breeding season commenced with a number of pairs present, but again low numbers, and birds were slow to settle probably as a result of the cold spring and the slow arrival of passerines such as Meadow Pipits which form the main prey base. The first eggs were not laid until mid May, at least two weeks later than normal. Although up to 5 pairs may have been present, only three nests were found, all in the core breeding area and two of these nests were from females involved in a polygamous relationship with a single male. One of these nests subsequently failed on eggs. Another pair present appeared to consist of sub-adult birds and it is not thought that they made a breeding attempt. Of the two nests remaining, both were successful fledging a total of 5 young. Statistically it was therefore a successful season, and unlike previous years there was no evidence of predation by foxes. However, the continued decline in numbers is extremely worrying and a similar position has been recorded elsewhere, particularly in southern Scotland. RSPB issued a press release on 9th August reporting that the species was on the brink of extinction in England and putting the blame firmly at the door of persecution on sporting estates. Whilst there is little doubt that this is a primary cause of decline in some areas, in Skye, where there are no sporting estates, it would be difficult to blame persecution. The cause of decline is in my view much more complex. I am extremely grateful to the many observers who send me records through the website - these are invaluable in trying to piece together the breeding population.