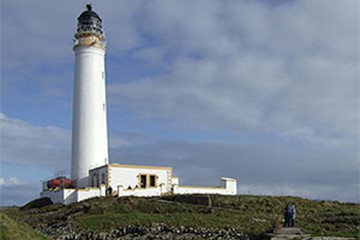 A small group of us managed to organise a trip to the remote island of Oigh Sgeir or Hyskeir which lies 5 miles south-west of Canna. Consisting of basalt columns, it is home to the lighthouse which was designed by the Stephenson brothers and built in 1904, remaining manned until 1997. The lighthouse is clearly visible from our home in Elgol so the opportunity to visit during a terrific spell of settled weather was too good to miss. It was probably too late in the season to get a proper handle on the breeding birds and though a number of Arctic and Common Tern chicks had fledged, the numbers did not seem to be high with a combined population of 150+. Great Black-backed Gulls and Herring Gulls were also breeding along with a few waders including Common Sandpiper, Oystercatcher and Ringed Plover. There were several creches of Eider duck and Greylag Goose. A young brood of Red-breasted Merganser was a bit of a surprise at such a remote spot. There were three pairs of Bonxies but no strong evidence of breeding. Migrants were already on the move with Whimbrel, Redshank, Dunlin and Ringed Plover passing through and it is enticing to predict what rarities might turn up at such a remote location. A total of 21 bird species were recorded in the area and there was also evidence of White-tailed Eagle visiting from the presence of pellets. There was a healthy population of Common and Grey Seal. Others have written about the presence of cetaceans and Basking Sharks in this area, but in the trip to and from Elgol, nothing was recorded other than Harbour Porpoise, confirming what is presently a poor season for cetaceans in the area. Details of plants, spiders and other insects were also collected.