Visit to the Ascrib Islands 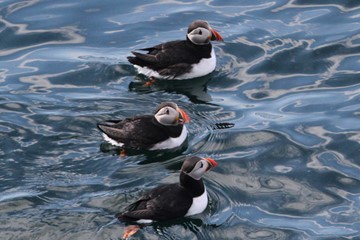 Most of the larger islands off Skye such as Raasay, South Rona, Soay and Scalpay were surveyed for birds during the recent BTO Atlas. A number of the remote uninhabited islands were not visited and knowledge of what is there is extremely limited. Amongst these is the Ascribs, very much a Seton Gordon favourite, but difficult to access so a number of us set off on a rib from Uig on a fine day on June 10. The idea was to survey as much as possible of all the islands and the small party included specialists in mammals, botany and bryophytes. Some 30 species of birds were recorded, with the small colony of c50 pairs of Puffins an expected highlight. Historically, Greylag Goose has also bred on the islands so the large breeding and moulting population was predictable given recent population expansion. Most seabirds seemed late in breeding and only a handful of Arctic Terns were recorded, which was disappointing. Seton Gordon had recorded Storm Petrels breeding and the remains of a predated bird did suggest that they may still do so. Though there was no evidence of breeding, a pair of Peregrines was a welcome observation. With some natural regeneration of native woodland on South Ascrib the excellent cover was being used by Willow Warbler and Lesser Redpoll, and a number of pairs of Twite were breeding. All the records of birds, mammals, butterflies, moths, spiders, plants and bryophytes will be entered on national databases providing at least some benchmark observations. Other visits to some remoter islands are planned.