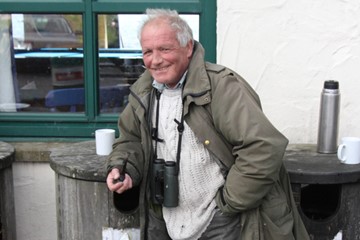 Its been a pretty grey day on Skye and I've been trying to put to bed my section of the 2011 Highland Bird Report. Just arrived to brighten up my day is John Chester's Isle of Eigg Bird Report for 2012!! Congratulations to John for not wasting any time, apparently helped by a few days stormbound in Mallaig.

A total of 142 species were recorded on the island in 2012, one more than in 2011 & a new record for Eigg. As happens every year a few reasonably regular species failed to appear with omissions from the 2012 list including Barnacle Goose, Sandwich Tern &, surprisingly, Wigeon. Two new species were however added to the island list; Glossy Ibis & Snow Goose though the latter were undoubtedly feral birds. The number of species breeding during 2012 was also high with 72 species known to have bred & at least two further species attempting to do so. John's report will shortly be available on the Isle of Eigg website - http://www.isleofeigg.net/