A Merry Christmas and a Happy New Year 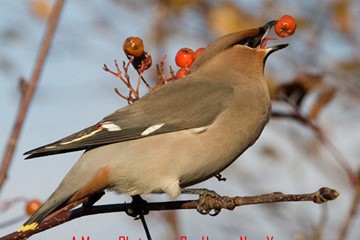 The year 2012 will be remembered by many in the rest of the country for its wet weather, whilst the north-west coast enjoyed one of its best summers ever. It was also an interesting year for birds with three new species recorded in the area. A 'tundra' Bean Goose was found at Kilmuir, part of a wider influx into the north of the country. A number of European White-fronted Geese also joined our wintering Greenland White-fronts. Whilst the warm dry summer allowed several passerine species to have repeat clutches, Golden Eagles faired badly with their worse breeding season on record. Two new species from north America joined the 'Skye list' - a White-throated Sparrow made a very brief appearance at Harrapool whilst a Semi-palmated Sandpiper hung around for several days allowing many birdwatchers opportunities for good views. Finally the year ended with unprecedented numbers of Waxwings and huge flocks of Fieldfares, gorging on the terrific berry crop, a product of our super summer weather. Many thanks for all our site supporters out there and we look forward to another exciting year.