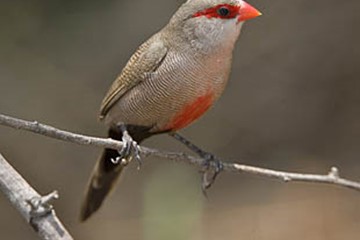 With family now living in Barcelona, visits have become more frequent during the last few years. It is very difficult anywhere in the city to escape the noise of Parakeets screaming above the noise of traffic and visitors. There are several species, with Ring-necked and Monk the most common and their origins are probably with caged birds which excaped from captivity. Other 'escape' species include Zebra finch and Common Waxbill (see image). The latter, a first for me, was found on a visit to a reserve at Llogrebrat - a reserve which is easily accessible, if a little noisy, as it is right beside the airport. Water levels were a little low at this time but a lot of migrants were moving through including Common Redstart, Blackcap and Pied Flycatcher. All the parks in Barcelona are worth checking for migrating species. Away from the city, we were lucky to spend a few days in rural Aragon. Though there remains a lot of semi-natural steppe country, it failed to yield any of the speciality species other than Little Owls which occupy many deserted farm buildings. Intensive agriculture and irrigation has become a feature of the area and sprinklers provide excellent perching posts for Southern Grey Shrike, Kestrels and Buzzards. There were huge numbers of hirundines passing through as well as lots of Wheatears, Whinchats and Yellow Wagtails. No doubt attracted by the large numbers of passerines, Hobby, Peregrine, Marsh and Montagu's Harrier were all recorded. A series of irrigated rice fields attracted large numbers of White Storks, Mediterranean Gulls, Lapwings, Common Snipe, Greenshank, Redshank and several Green Sandpipers. This was all in an area rich in birds which does not feature in any of the guide books - Catalonia and Aragon have a great deal to offer. See the overseas section of the Gallery for several images taken on this recent trip.