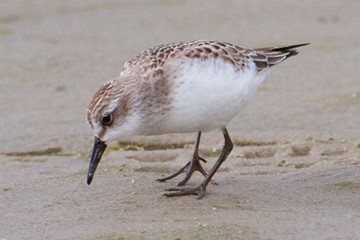 The Semipalmated Sandpiper breeds in Alaska and Canada and migrates in winter to the Caribbean, Central America and South America as far as Argentina. First recorded in 1992, it has probably been recorded only 30-40 times in Scotland and only once previously in Highland. When Martin Benson found a juvenile bird at Harrapool on 7th September 2012 it was the first record for Skye and Lochalsh and a terrific reward for hours of regular watching his local 'patch', and now the best hotspot in the area. There are problems of separating this species from some other small waders but the partial webbing between the toes, illustrated on Martin's image, are diagnostic - hence the name 'semipalmated'. The bird remained with us for nearly a week mainly assocaiting with Dunlin and Ringed Plover and many locals and visitors were rewarded with excellent views. The record still has to be accepted by the British Birds Rarities Committee (BBRC)