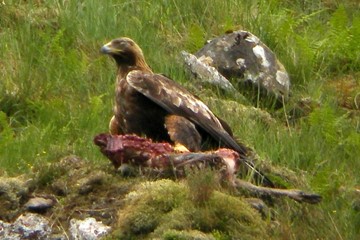 We had a poor start to our 2012 Golden Eagle monitoring in Lochalsh, but in the end were relatively relieved to have a year of around “average” breeding success for our area. We detected only 6 pairs on eggs out of 18 occupied ranges in 2012. The wet preceding winter, cold weather during the egg stage (March and April) and scarcity of prey as a result of the severe winters of 2009-10 and 2010-11, may all have contributed to this low number of pairs nesting. The incredibly dry and sunny weather during the chick stage (May-August) seems to have been a saving grace however; although the chicks may have battled with overheating and dehydration on the nest, this weather would have allowed the adults unrestricted hunting opportunity.

In the end 5 pairs fledged one young each; although we were disappointed as one of these pairs had twins, the younger of which died only a couple of weeks before it was due to fledge. As with on Skye, it seems that the Lochalsh Golden Eagles generally struggled to find enough food for their young this year. Prey items recorded included Grey Heron, Buzzard, fox cub and red deer calves (the adult pictured was actually flying with this towards its nest, unusually for a Golden Eagle its wings flapping at a rate of “ten to the dozen”!).