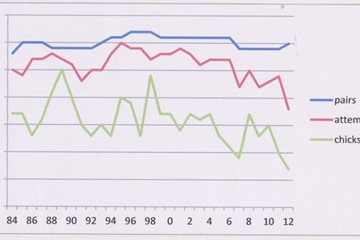 2012 continued the downward trend of recent years with the poorest breeding season for Skye's Golden Eagles since 1984. Only 7 young have fledged from 6 successful nests. Whilst the number of range holding pairs remains fairly constant, the numbers of pairs attempting to breed has fallen markedly. The long very wet winter was probably a major factor in birds starting the season in poor condition. However, the weather having been dry throughout the breeding season, could not account for the high number of failed breeding attempts. Live prey could have been part of the problem as at several notable locations, rabbits were at very low numbers.