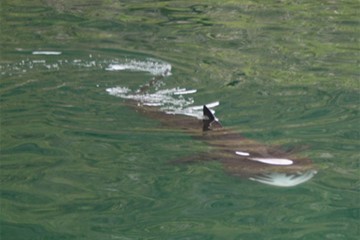 Basking Sharks being tracked by satellite in Scottish waters have begun to reveal some secrets. The last of twenty sharks was tagged last week by scientists from Scottish Natural Heritage (SNH) and the University of Exeter, as part of a project to find out more about their life-cycle. The results of the project will help inform decisions about Marine Protected Areas and the future management of Scotland’s marine environment. The tags, which allow the public to track the movements of eight of the sharks online, show that in the last three or four weeks many have stayed around the Inner Hebrides where they were tagged, while one has made its way southeast to Colonsay and Jura and two have headed west to the open sea beyond the Outer Hebrides. To track the Basking Sharks online, go to http://www.wildlifetracking.org/?project_id=753. Incidentally one of the sharks has been called 'Elgol' - the image shown is of a basking shark by Stuart MacKinnon of Misty Isle Boat Trips out of Elgol.