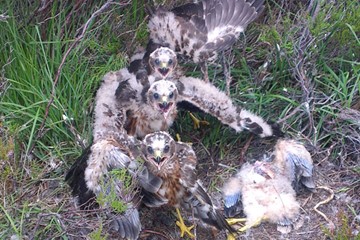 My breeding study for Hen Harriers commenced in 2000 and since 2005 has concentrated in north central Skye where the population has averaged between 8-12 pairs. In 2011 we enjoyed relatively high productivity and a pair bred for the first time in Lochalsh. It was therefore extremely disappointing that only 5 pairs could be found this year, a pattern which was unfortunately shared by other raptor workers. Despite significant investment by English Nature and Scottish Natural Heritage, and by the RSPB, there were no birds at Bowland in the north of England, and only one pair at the Langholm project. Apparently there were only two pairs in the whole of the south of Scotland which includes several SPA's (Special Protection Areas). Winter survival was clearly a major problem and weather may well have been a factor. Hen Harriers have always been widely persecuted and another theory is that sporting interests are systematically targetting the species at winter roost sites. Of the five pairs which bred in Skye, one pair failed on eggs though the reason was not established. Two pairs failed at the chick stage with fox predation being identified by the use of nest site cameras. The one bonus was that the remaining two pairs fledged three (see image) and five young successfully. Despite it not being a good vole year, there was clearly other prey availability no doubt helped by our protracted spell of good weather. My sincere thanks to everyone who has sent in records.