With Eagles on Canna 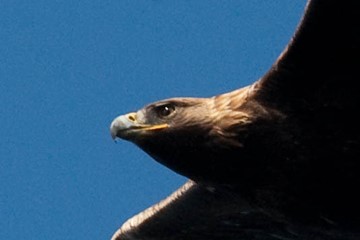 Living in Elgol on the south-west corner on Skye we are privileged to enjoy wonderful views of the Small Isles and over the years I’ve enjoyed several trips to Muck, Eigg, Rum and Canna, invariably in search of birds. An invitation from Martin Carty to join Justin Grant and a party to ring the White-tailed Eagle youngsters on Saturday past was not to be missed. Owned and managed by the National Trust for Scotland (NTS), Canna is the most remote of the islands but in wildlife terms is a bit of a jewel, sporting the largest seabird colonies in the area and also hosting Golden Eagles and White-tailed Eagles. Both species thrive as a result of the seabird colonies and also a healthy population of rabbits. There were two White-tailed Eagle chicks in the nest this year and these were ringed by Justin following an exposed cliff abseil, in what was a carefully planned and professionally executed operation with the welfare of the young birds a priority throughout. Both young were thriving and both will hopefully fledge next month. We then retreated along the cliff for an unforgettable encounter with a Golden Eagle. ‘Goldies’ are invariably shy and in 40 years of eagle watching I have occasionally known birds to come and have a look at me. However, this bird was positively inspecting us, providing unique views, terrific photographic opportunities, and an altogether memorable birding moment. Up to 1500 pairs of Manx Shearwaters previously bred on Canna but the population disappeared as a result of rat predation. Following the recent eradication programme numbers are slowly returning and we looked at some of the areas which NTS plan to survey over the coming months. A wonderful day in superb weather was capped by some superb food in Gille Brighde (the Oystercatcher) – the isle of Canna cafe and restaurant – well worth the visit in itself! The ferry trip back to Mallaig took us through rafts of Manx Shearwaters and several small pods of Common Dolphins. Many thanks to Martin, Justin, and all involved for making it such a memorable day. There are some images in the UK Birds part of our Gallery. Also have a look at http://cannawildlife.blogspot.co.uk/ and www.cannamousephotography.co.uk and of course for the foodies http://cannarestaurant.com.