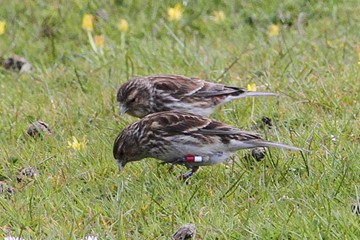 We are extremely fortunate that large numbers of Twite breed in Skye and Lochalsh. A species of high conservation concern, it is the classic 'LBJ' (little brown job) which is often ignored, but which unfortunately has been in rapid decline in many parts of the country. Whilst a small number of birds overwinter, the vast majority migrate and are absent from the area between November and early April. An increasing number seem to be visiting gardens in early spring where there are feeders and where there is an opportunity to observe them closely, and most importantly, check the legs for colour rings. Our birds winter in several areas and have been recorded in north England, on the north-east coast of Scotland, and more recently in Orkney. The bird shown in the image was ringed as a juvenile in the west mainland of Orkney during last winter and found last week at Greshornish. Another Orkney bird was recorded at Ose. A bird recorded at Achachork on the 28th April had been ringed at Foveran north of Aberdeen in the winter of 2008/09. As well as wearing a metal ring they will show a sequence of colour rings and it is important to record these in the proper sequence on each leg. I will happily pass details on to the ringers involved.