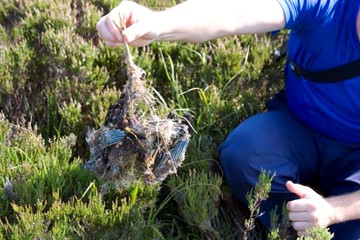 The image shows a dead Hen Harrier chick, one of a brood of five trampled into the ground at a Skye site in 2008. At this time of the year, egg collectors are on the move and 'Operation Easter', a long running initiative by the police and RSPB to combat egg thieves swings into place. Unfortunately this had not prevented clutches of Golden Eagle and other rare species being stolen in the area. In the knowledge that Sea Eagles have been poisoned in neighbouring areas in previous years, and information that an adult White-tailed Eagle was shot on Skye at this time last year, it is a timely reminder that although incidents involving some of our iconic birds are rare on Skye and the west coast, they nonetheless occur, and everyone should be on their guard. The investigation of such wildlife crimes is the responsibility of the police and the Northern Constabulary website provides the following advice should members of the public find anything suspicious:-

Constable Ed Frazer is the local WCO and is based at Portree Police Station (01478612888). Further information is available on the Partnership for Action on Wildlife Crime (PAWScotland) website at http://www.scotland.gov.uk/Topics/Environment/Wildlife-Habitats/paw-scotland/