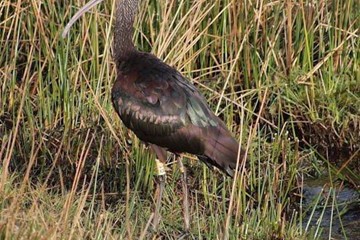 When Glossy Ibis turned up in the Laig area of Eigg on January 20 it was a significant surprise to locals as well as to the wider birdwatching community. A single bird would have been interesting enough let alone a group which peaked at 7, but which remained at around 5 until they disappeared a couple of days ago on the 1st March. Normally this species would be spending the winter in the south of Europe so their arrival was a bit of a surprise. Winter records in Scotland are scarce and this is certainly the largest group recorded in winter. A single bird was on Tiree on 21st February 1901. The only other local record was one shot in Skye in November 1911 and records were much more frequent prior to 1950 than since. The largest group involved 20 birds in Orkney in 1907 and it appears that this is the largest group recorded in Scotland since. It was a real bonus for John Chester on Eigg and all the locals and my thanks to Brian Gardner for the use of his image. I visited Eigg on 2nd March to try and see the birds but my reputation obviously went before me and they decided to leave!