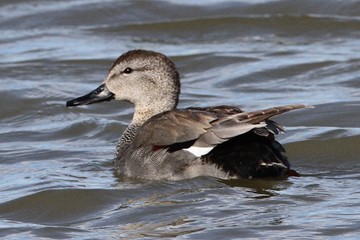 As we prepare to fly back to-morrow our three week break is coming to an end and the weather is more seasonal with temps hitting 17 degrees to-day. Aiguamolls Reserve on the Costa Brava is a favourite with lots of Gadwall (see image), and there were also many more Greylag Geese there than we had previously seen, pushed south on the back of the cold eather affecting the rest of Europe. Amongst the Greylags were two European White-fronts thought to be the third record for the area, and two Bewick's Swans one previously ringed at Slimbridge. Because of the cold weather there was an absence of early summer migrants as Swallows and Sand Martins would normally be on the move. No matter where you watch birds weather patterns can be strongly influential in what you see. With Blue Rock Thrush and Peregrine Falcon to-day the species list stands at 126 which does not include a probable Rock Sparrow, and - Wallcreeper will need to wait for another day. Just in case you were wondering we were also visiting family as our son lives in Barcelona, and a trip to the Nou Camp to see Barcelona beat Valencia 5-1 wil hopefully convince you that holidays are not entirely about birds.