Off to Sunny Spain 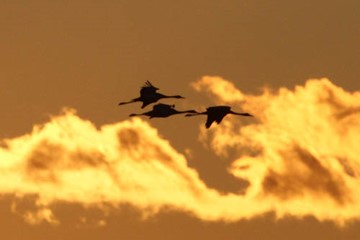 Though happy to get away from the winds and rain of Skye, it was not anticipated that the bad weather would follow us. Temperatures in Spain plummetted to all time lows as we visited the Ebro Delta and Aragon. Lake Gallocanta in Aragon was frozen and the wintering grounds for thousands of Common Cranes, at 4000' was exposed to an icy siberian blast which meant few walks and most birding was from the car. Migration often starts in February in Spain but apart from a few Black Kites there was little sign of anything on the move. Highlights so far have included 64 Great Bustards in the steppe areas west of Lleida where we found lots of Black-bellied Sand Grouse but no Pin-tailed. A search for the rare Dupont's Lark proved unsuccessful. Birds of prey have so far included Golden Eagle, Booted Eagle, Merlin, Hen Harrier and as ever no shortage of Marsh Harriers. An obliging Moustached Warbler at the Ebre was a first and it was good to catch up with many favourites including Purple Gallinule and Glossy Ibis as well as regular Skye species like Black-tailed Godwit and Jack Snipe. There is a selection of images in the overseas section of the Gallery and we hope to visit a few Catalonian hotspots in the coming week.