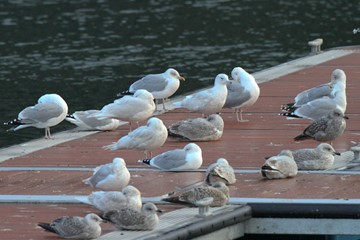 The numbers of white-winged Gulls we see varies each winter and the exact reasons behind this are possibly not well understood. The last two winters were exceptionally cold yet numbers of white gulls were low. The exceptional windy weather may be a factor this winter. Iceland Gull breeds mainly in Greenland but Glaucous has a more widespread distribution. The two can normally be easily separated as Iceland is smaller and has a more 'dove-like' head. Kumlien's breeds in arctic Canada and is a hybrid between Iceland and Thayer's Gull and sometimes the markings can be very subtle. This winter has seen good numbers on Skye and Lochalsh, including several adult Iceland Gulls which is unusual. Since the Portree 'dump' was closed the area is probably less attractive to wintering gulls though Portree harbour has always attracted some. However the real local mecca is Mallaig where Stephen MacDonald has found around 20 white-winged Gulls, not quite reaching his record total here. In the image of one of the new pontoons at Mallaig, are five Iceland Gulls of varying ages, including a Kumlien's. Images in the Gallery will hopefully help out with the identification of the different species and hybrids.